How to develop a protocol of therapy for therapists and psychologists. REGISTRATION OPEN for one day online course by SOCH Academy

Exploring OT scope in healthcare:OT in non traditional roles Understanding the OT scope and connection with global healthcare. Looking beyond traditional clinician and or academia roles. Would be wonderful for fresh graduates and post graduates too

Researcher Week Episode 4 with Guest speaker, Danielle Williams, Missouri University and spotlight talks on innovative technology in OT and another paper on Autism

Temple Grandin and Stephen Shore would be happy to take any questions by parents and professionals today 8pm IST/ 8.15pm Nepal Time. Hosted by Ganga Gurung, Occupational Therapist, Nepal. For sending in questions and link for program please fill

Importance of Conducting research in OT. Understanding Parents Diffculties in executing ADL of children with ASD. Determine the prevalence of SPD in children with Cerebral Palsy

Inviting all Occupational Therapists in India and globally for scientific dissemination.

Importance and Development of Vocational Training for Children with Special Needs

Reflections: Real Life Stories of How a mother went on to create legislation and public movement

REFLECTIONS: Real Life Stories of those who navigated challenges with resilience and equanimity

REFLECTIONS: Real Life Stories of people who transformed themselves and society

REFLECTIONS: Real Life Stories of people who transformed themselves and society. FB live conversations at

Join Dr Neelam Sodhi live with Manish Samnani – stories of resilience and equanimity on zoom as per details below now:

Executive Function (How to Assess and Treat in Autism Spectrum)

Teletherapy: Myths and facts one hour session with Q&A “Should I wait therapy centres to restart and receive hands on therapy”

Meera Foundation Organised a workshop on the topic ‘Igniting the brain : Increasing focus and attention in kids and helping them learn better’ led by Manish Samnani (Co-Founder Meera Foundation) 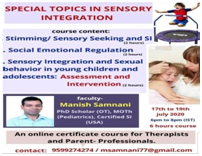 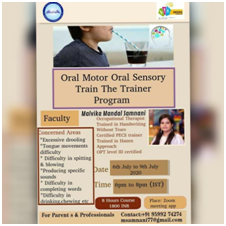 Making Autism a Gift Rather Than Weakness or Disability

1. SOCH has provided services to more than 1000 children till date from year 2009 and have been instrumental in mainstreaming and ongoing support to such children.

2. SOCH has conducted various trainings for parents and professionals through in house faculties, and other national and international faculties. (Annexure 1).

3. SOCH has association with some international bodies:

A. University of Southern California, USA;

4. SOCH is the INDIA coordinator to conduct and organize courses based on University of Southern California curriculum. Till date 10 such courses have been hosted and attended by 250 participants.

5. International faculties from the fields of Behavioural Sciences and Movement Therapy have visited SOCH and offered workshops.

6. SOCH faculty has presented 15 research papers on the work accomplished in national conferences.

8. SOCH is the only organization in Delhi/ NCR region to have 5 disciplines working in a coordinated manner since last 5 years for children.

9. SOCH has received training from NeuroDevelopmental Therapy Association of USA to treat children with physical disability.

10. For their contribution to the field of special needs and academic excellence, SOCH faculty has been felicitated by Smt Sonia Gandhi, Sh Pranab Mukherjee and VIMHANS hospital, Delhi.

11. SOCH faculties are regularly invited by national bodies to express views on management of children.

12. SOCH has been instrumental in developing therapy services at the following places and is involved with on going mentoring.

b) ACE (School for Autism in collaboration with New England Centre for Children, Boston), Gurgaon.

15. Certification Course on Sensory Integration, Course Coordinator for INDIA in collaboration with University of Southern California, June-July 2018 at Gurgaon.

23. Autism Course by Adelphi University in New Delhi and Dhaka in 2018.

24. National Conference of OT to be held in PGI Chandigarh in 2019.

18. Reading and Handwriting problems in children with or without special needs, Malvika samnani, Bangladesh, February 2016.

26. Capacity building for parents and professionals at ICDDR, B, Dhaka, Bangladesh, Feb 2018 through Dr Malvika Samnani.